US Men Fighting For Olympics Berth in Germany 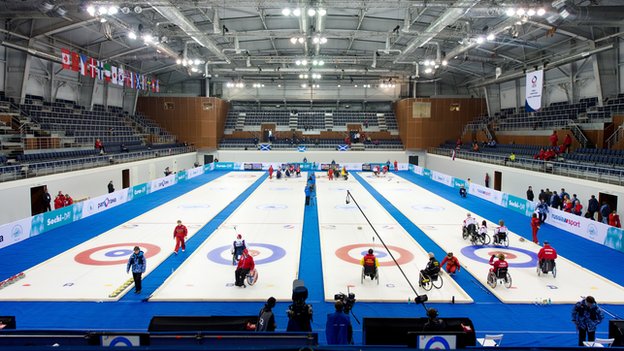 The curling venue in Sochi, Russia, host of the 2014 Winter Olympic Games.

You may have recently seen the U.S. Mens and Womens Curling Olympic Trials on NBC Sports Network.

For the ladies, they’re likely already packing their bags for a two-week trip to Russia. For the men however, their plans to be in the Olympic Tournament in February ride on their success at a qualifying event this week in Germany.

The men are competing in an 8-team field that includes some heavy hitters of international curling and their advancement is no guarantee. South Korea, New Zealand, Czech Republic, France, Germany, Japan, and Finland round out the field.

Through two days of competition, the U.S. is at 2-1 and in a three-way tie for second place. The top two teams advance to Sochi. The others watch as we will, from home.

Korea is undefeated at 3-0 and ‘Murica is tied at 2-1 with New Zealand (which is led by a native Scot) and Czech Republic.

The U.S. may have already picked up a key victory by defeating New Zealand, 7-6, in their second draw of the tournament. Games on Dec. 12 include matchups with Germany and Japan.

This entry was posted in Uncategorized. Bookmark the permalink.

One response to “US Men Fighting For Olympics Berth in Germany”